Unlike Your Mom’s Pressure Cooker
from 25 Years Ago, 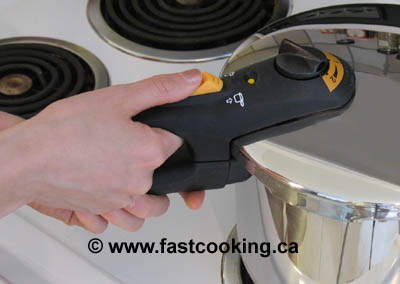 Locking the lid on a Fagor Duo.  It is not possible to open the lid until all the pressure has been released.

Designs have advanced considerably since even the 1980s.

New generation pressure cookers, such as the Fagor Duo, that are UL-listed (by Underwriters Laboratories) have to have certain safety features in order to obtain the UL listing.  One of many myths about pressure cookers is that pressure cookers “blow up”.  Even in the 1940s and 1950s, this wasn’t actually the case.  Two other conditions were the most likely reasons the contents escaped.

The second condition that occurred with old pressure cookers was that the vent tube that the “jiggler valve” sat on would sometimes get clogged with food, and the pressure would increase to the point where it would blow out the over-pressure plug.  The Fagor Duo has a secondary spring-type over-pressure valve and so doesn’t use an over-pressure plug.  In addition, there is a gasket release slot for the worse case scenario of extreme over heating and over pressurization.  The gasket will be pushed away from this open release slot in the rim of the lid; allowing the pressure to escape safely in a downward direction.

These features all contribute to making a Fagor new generation pressure cooker very safe and extremely easy to use.

what to look for when selecting a pressure cooker

history of the pressure cooker